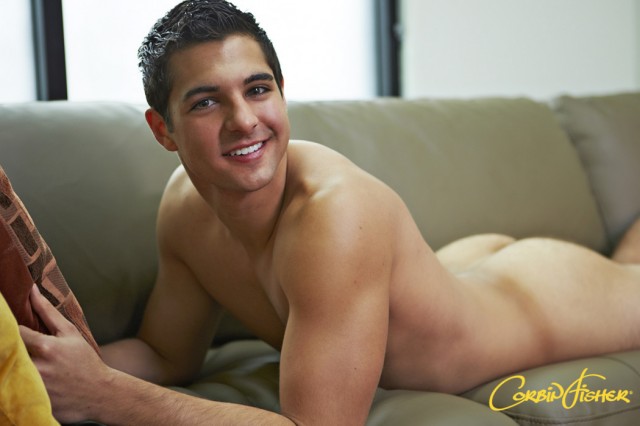 He does have an interesting smile! Gentry’s definitely a sexy stud – enjoy his solo session!

What can I say about this handsome young man? Gorgeous eyes, killer smile and a terrific, engaging personality. Oh, yeah … and a beautiful athletic body and great dick!

I’m not kidding about the smile … when Gentry smiles, he makes people a little weak in the knees! This 20-year-old also has an adorable baby face, a great sense of humor and is pretty musical. He plays guitar, so we are well on our way to forming a CF band here!

– we like the brainy ones here at Corbin Fisher!)

Gentry was the quarterback when he played football in school, and he keeps that body in shape by working out a lot and playing sports. Currently, Gentry is a bartender and is studying psychology … I’ll be happy to get on the couch with him!

Gentry pulls off his shirt to show off his body. He goes to the gym every other day and likes to run on his off days.He smiles as he tells us about the first time he had sex – he and a girl on his track team skipped practice to go back to her truck in the school parking lot and have sex. Gentry says people saw them and told everyone.

Now, Gentry loves to have sex in public and he’s turned on by the thought of everyone seeing this video.

Gentry takes off his pants and sits down. It’s been a week and a half since he jerked off, so he’s ready to get started! He strokes his big cock, and rubs his chest. Gentry’s abs flex as he jerks and pinches his nipple.

Gentry is clearly enjoying showing off for us! His smile, like his dick, never seems to go down. He bends over to show his hot ass, then lies down and pumps his cock furiously.

Gentry shoots a big thick load all the way up his stomach. He rubs it into his chest and abs. Yum!