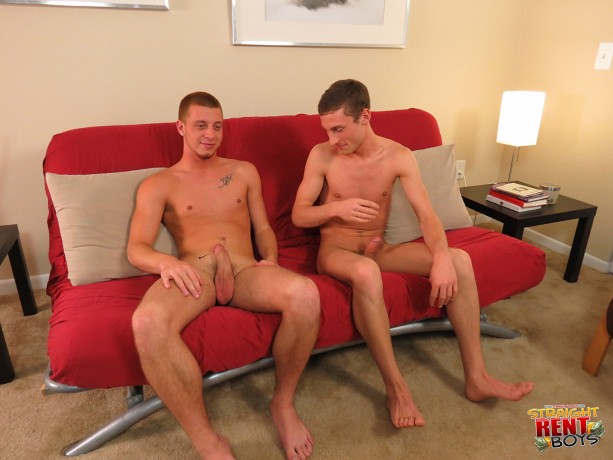 Futons are fun…I guess. Well, with two sexy guys on a futon, I bet they are more fun than you’d expect!

Well, look who’s returned, Scott Sommers! He’s been away for a couple of years but, “the futon called him back.” Travis Cooper is also here with Scott and they’re going to do some “universal” things, like fucking. These two got to know one another in the green room and both are up for it, or they will be, as soon as they suck each other. For Straight Rent Boys, here’s two hot models who; ah, fuck it, they know what to do. Sit back, grab the lube and experience Travis bending Scott over.

These boys are great to work with, very cute and experienced; Travis “sucks” at it and Scott admits, “I’m a breading cow.” As I film, and Scott grows, I think he’s more of a bull than cow, but they both have holes. Scott seems to be pleased with Travis’ work; Travis also “appreciates” the reach around, and it shows. Scott then works up Travis and when I ask Scott if he remembers how to suck cock, Travis chimes in, “feels like it.” Shit, deep throating Travis has me convinced; Scott has kept up his skills.

Soon, Travis is not talking, he’s too busy breathing heavy and licking his reddened lips. The boys open up the futon and “get ready.” Travis does a great job of “athletically reaching” Scott’s hole, and just starts thrusting the boy. Damn, Travis’ body looks great in this position and Scott is taking it like a champ. The two go at it for a while, both panting, and then they switch positions and Scott climbs on top.

Working Travis in takes a while, but both feel the pleasurable sensation quickly. Scott jerks himself as he rides and Travis watches his partner bounce. Travis is all the way in and Scott is feeling every inch, grinding back and forth. With a combination of riding and rocking, it’s not long before Scott is close. Travis has Scott lie back as he takes over. Just watching Travis’ fat cock go in and out of Scott is hot and I’m glad I put these two boys together; I think they are happy as well. Scott shows us it feels marvelous too, as he moans and gasps with each thrust.

“God, I’m sticky, sweaty and exhausted,” remarks Travis; Scott says he’ll be back, “once I recover.” Yep, take a bit and recuperate, let the blood flow back throughout the rest of your body, not just your dick. Then, come on back to SRB, we’ll keep the futon handy and the boys “on.”