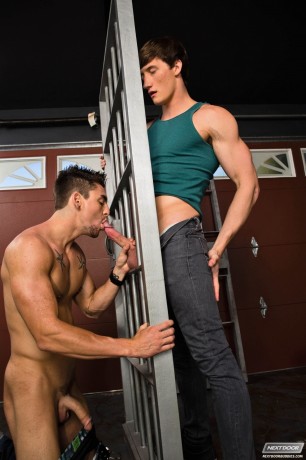 Check out these two sexy muscle studs! Enjoy Johnny and Lance in this hot scene!

Johnny Torque has been here before. Contracted by this weird couple to assemble their various sex apparatii has become somewhat of a regular side job for him. In this case, he brings Lance Alexander along to help him out and make a little extra cash. Lance is clearly out of his element somewhat, looking at the makings for what appears to be a jail cell, he wonders out loud how it will be used. Eager to demonstrate, Johnny has him sit down and then he pulls his cock out and feeds it through the bars into Lance’s waiting mouth. Lance, full of both understanding and cock, takes Johnny’s rod deep down his throat. Moments later, with the prop jail door long since ditched, both guys are naked and swordfighting as Johnny lowers himself down and returns the oral favor on Lance. Getting harder and hornier by the moment, Lance bends over and lets Johnny ease his cock inside, and Johnny goes slow at first, but can’t help his hunger and begins pumping with reckless abandon. Lance lets out a moan of pleasure as Johnny’s thrusts pound him deep inside, and both guys are ready to explode, so Johnny pulls out and they look at each as the spew oozes from their cocks in a milky murky ode to roleplay.