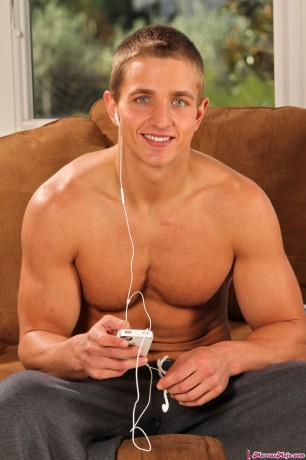 Hmm…musical cock stroking? Maybe Marcus would let me play the xylophone on his abs, or the drums on his big pecs! Enjoy his hot solo scene!

Marcus Mojo is crazy excited about his plans tonight. A party with friends, then the club, then who knows? Man he’s jacked. So pumped up that he can’t sit still. He puts on his headphones and blasts the music in his ears, and then just starts bouncing off the walls. Jumping all around, he gets himself all worked up thinking about how much fun it will be. The music running through his ears, he realizes he’ll burst if doesn’t do something, so he instinctively pulls down his pants and begins to stroke his dick to the beat. Working himself up with the lube, he can feel his meat swelling in his hand as he lifts up onto his knees for more traction, fingering his taint and teasing his asshole. Reclining back on the chair, he feels the music’s crescendo at the same time that he is at maximum overload, and he explodes on cue to the cascading sounds of drums and horns. Music for your ears, and for your eyes.