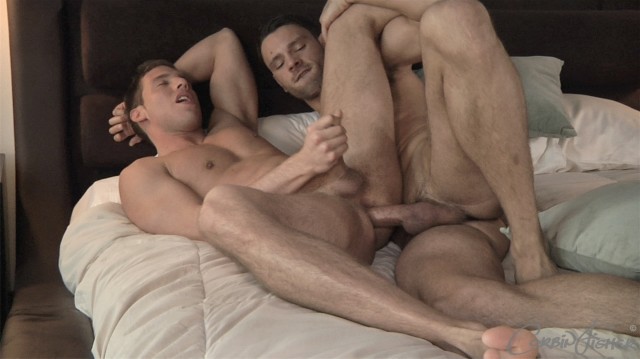 I have yet to pound anyone’s virgin ass…and even though I am a total bottom, that doesn’t mean I wouldn’t, given the chance! Especially if the person was half as studly as Grayson! Trey gets to steal Grayson’s sweet virginity in this hot scene – enjoy!

NOTICE: This video was filmed without the use of condoms. Individuals should be comfortable with such material before viewing.

I was hoping we could get Grayson to bottom for another hot guy. He’d been remarkably willing to get a blow job from Blake and to fuck Zeb, but he was nervous about getting fucked. In those cases, I think its good to get someone who’s enthusiastic about bottoming to show a newbie the ropes. Luckily, Trey was around and more than willing to take on topping Grayson!

Trey, as always, looks amazing. Grayson was kind of shy around Trey at first, but once things got going, Grayson got hot and heavy with Trey. He took great care of Trey’s big cock, getting it good and wet for his hole. Trey told Grayson to get up against the window so Trey could play with his ass. That drove Grayson even crazier with desire.

Trey plunged his big dick into Grayson’s ass and slowly fucked him. Grayson backed up against Trey, wanting every inch of Trey inside his ass. Trey fucked Grayson from every angle until he made Grayson blow a thick

Now that is going all the way!