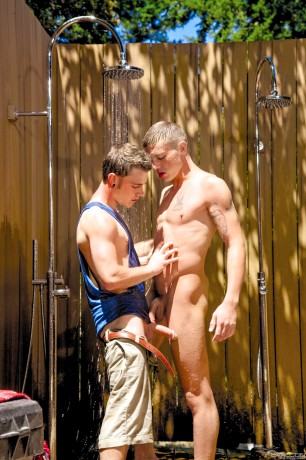 Oh my…I want to shower outside with these hung and studly boys! Please oh please, can I? Oh well, at least I get to watch them have fun! Enjoy the scene!

James Ryder is flaunting it in an outdoor shower — colorful tatts, smooth muscles and a long, swelling cock. Hiker Drake Wild wasn’t expecting this species of wildlife, but he exploits his luck by finding a spot from which to ogle. He is hard before he can unbutton his pants. Drake is seen by James, whose actions take on a striptease quality. Cupping his pecs, swaying and stroking himself, James lures Drake into the spray, clothes and all. They lock lips under the cascading water, then hold hands and stroll to the deck. His prey firmly in hand, James begins sucking Drake’s cock. It’s hefty and cut. The fervor with which he sucks, and the expressions on his face convey that he always hoped this would happen and he can’t quite believe it did. Drake lets him suck for a long time before returning the favor to this handsome stud who has just made his day. He gives a foamy blow job. On a bench nearby James kneels so Drake can fuck him from behind. Again, his expressions betray a virginal quality that adds another layer of heat to the fucking. James flips over. Both of them are breathing in short gasps now, and James showers his tummy with spooge, quickly followed by Drake’s shower of cum on his head and face.