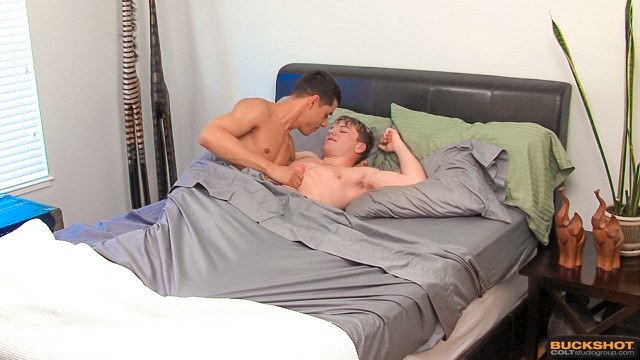 I want to wake up with these studly boys! Bobby Hart’s hung cock, Doug Acre’s cute body…what amazing treasures to wake up to! Enjoy their hot scene!

What better way to start the day than with a fun and frisky romp in the hay? Latin stud Bobby Hart is in a playful mood as he wakes his sexy young friend Doug Acre by wrapping his eager lips around his buddy’s morning wood. Doug smiles as he looks down to watch Bobby suck and swallow his big-boy meat-stick. The morning passes slowly as these guys enjoy the taste of each other’s cocks, with lots of hot kissing, stroking and slurping. Bobby turns his attention toward Doug’s hot boy hole, using his tongue he makes Doug squirm and gets that beautiful butt hungry for his cock. Legs lifted in the air Doug is ready for an injection of Bobby’s hot dick. Bobby slowly probes his thick piece deep into Doug’s tight hole, opening him up for a deep and hard pounding. Once he is in, Bobby drills his tool hard, giving Doug a hot and searing fuck. Lying back on the bed Bobby invites Doug to ride his thick pole. Doug eagerly takes a seat on that monster dick and goes wild. Feeling that big dick up his hot ass Doug jerks and squirts a healthy boy-load of sweet cum. Still reeling from his big nut-busting load, Doug lays at Bobby’s side as Bobby gives his own fireworks display, shooting off with a spray of hot dick juice that only cums from a hot morning fuck.