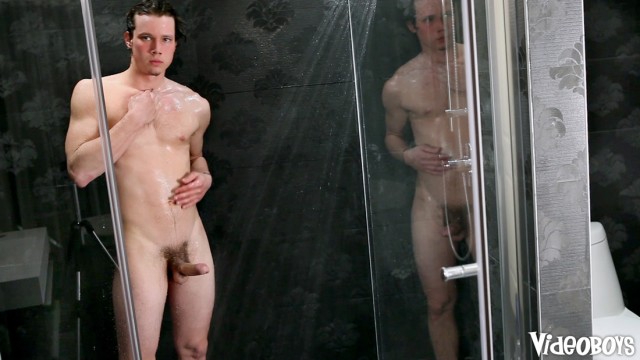 Oh my, what a sexy stud! Justin has a pretty unique face and body, and he knows it! Enjoy watching him blow in the shower!

This is the day we’ve been waiting for for more almost a year: The Return of Justin Lebeau! Since last spring Justin has been traveling across Canada, living the life of the happy wanderer, taking jobs here and there, then moving on. But finally he’s home in Montreal and anxious to get back in front of the camera. And, wow! He’s looking better than ever, with a bit of extra muscle from his construction work, and a little bit of hair on the chin. Justin was excited to strip down and show us that he’s still the horny boy with the thick cock that we love so much.

Justin decided to show us his stuff in his favourite place to jerk off: the shower. After warming himself up with some hot water all over his body, he soaped himself all over and let the water and suds run down his chest and abs over his hard cock. But once he’s horned up enough, the water is too much of a distraction so he turned off the tap and lied down on the shower floor. From that position he gave himself the best orgasm he’s had in weeks. It’s hard to get privacy when you’re on the road.