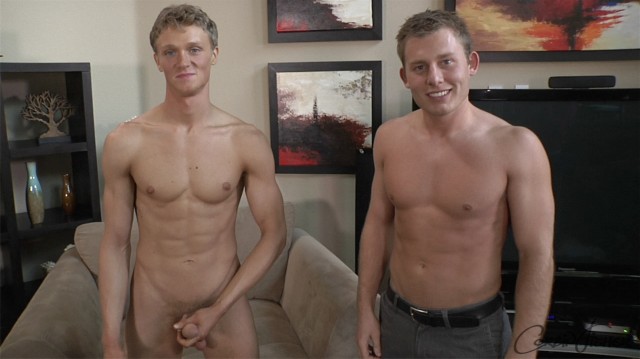 Corbin Fisher features some of the hottest collegiate studs around. Click here now to check out the full lineup!

Patrick is a tight-bodied, blond, Southern stud that’s a perfect fit for CF – he’s cute as heck, and also has quite the winning personality. He can’t help but laugh while sheepishly admitting just how quick his first sexual experience was. Unlike some of his fellow CF studs, Patrick shares that he actually doesn’t have sex too often – he says he’s just a super nice guy who isn’t really one to go around hitting on others, but will happily respond when someone hits on him.

Given it had been awhile since Patrick had gotten laid, he was ready to have himself some fun at CF – and Kenny was happy to help him out with that! Patrick could hardly wait to strip off his clothes and reveal that ripped body – Pete even had to get him to slow down a bit before ripping those boxer briefs off. Thankfully, Pete comes to his senses fairly soon, and Patrick reveals his blond pubes and low-hanging balls.

Though clearly having fun, Patrick was also obviously a bit nervous as he laid back to let Kenny work on his cock. He responds to his first BJ from a guy quite well, and is immediately rock-hard and fucking Kenny’s mouth. His dick just seems to keep growing, until he’s feeding Kenny a massive load.