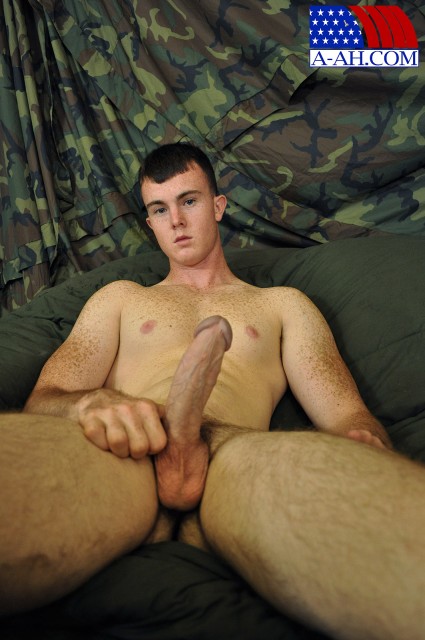 Ugh, I have such a weakness for studs with freckled muscles…and with big dicks! Austin’s definitely has both, so I’m already drooling over him! Enjoy watching him blow a big load all over his abs!

Check out more sexy men in the military at AWOL Marines.

Austin joined the Marines because he always wanted to be a part of something bigger than himself. He’s got the look of small town boy with clear blue eyes and freckles from head to toe. He just got back from Afghanistan where he helped to capture some enemy commanders. The handsome Marine plops himself on the couch and immediately unbuttons his camouflage shirt before reaching into his pants. As his hand glides gently up and down beneath his underwear, he stares across the room. Yanking his pants lower with his left hand, he pops out a massive pink boner nestled in a mass of reddish-brown pubic hair. As the room warms up, he strips off his shirt to allow the air to cool his developed, freckled peeks. After a bit of time working on his thick meat, he eases his pants down to his boots. The fur on his white legs creates a soft glow of red. With his stiff dong poking him in the tummy, he reaches down and peels off his boots and completely strips off his pants. Kneeling briefly, his ass cheeks clenched, the soldier continues choking his pink snake. Finally settling onto his back, his body tenses and his neck flushes. He grunts enthusiastically and spews gobs of cum onto his pale abs. 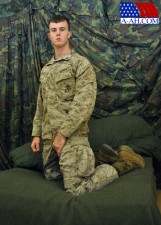 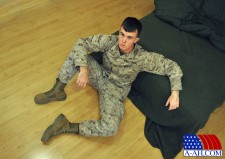 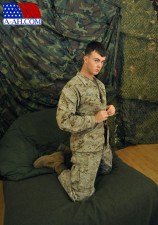