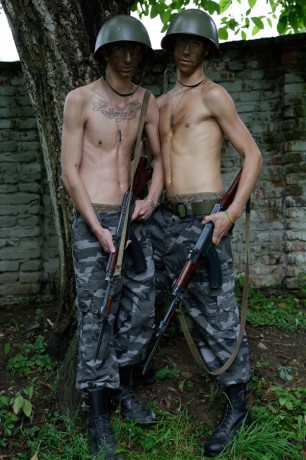 Ok, so Staxus soldiers don’t always have the most realistic military bods. You know, all big, beefy, and muscular…but their impressive cocks more than make up for that! Enjoy watching Zack fuck Will!

Indeed, it’s not at all long before the antics in the garden have been superseded by shenanigans indoors; at which point you might begin to appreciate the full scale of the weaponry on offer, as the two lads savour a wanton top-to-toe session, deep-throating each other’s dicks like a pair of animals on heat.

All this is nothing, however, compared to the red raw fucking to come and the sight of Jones bouncing up and down along the full length of Todd’s ramrod. Believe us, that boy’s prostate gets the rubbing of its life, and it’s no fucking wonder that he erupts like fury once Todd has coated his ass with spunk. A definite winner in every imaginary sense!