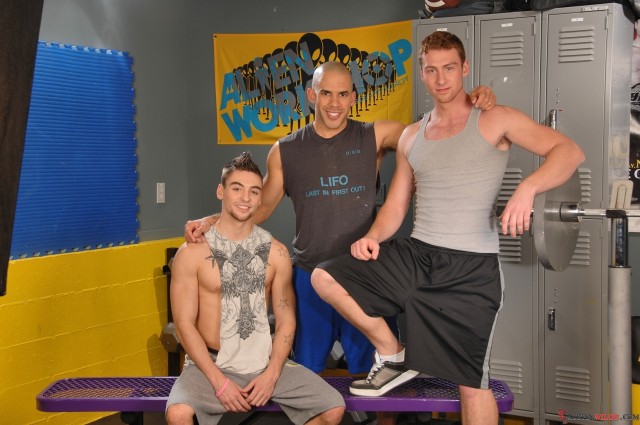 Austin usually gets his swell on before any scene. We’re catching up with him and his two scene partners while they pump some weight and measure their guns. It’s not hard to see that Johnny Torque and Connor Maguire are regular gym rats, displayed by their tight bods.

These three hotties are goofing around while getting the juices flowing just right for a passionate fuck session. Austin’s getting warmed up by having a taste of Johnny’s tight ass. Connor’s starting things out with a nice dose of dick as Johnny slides his fat cock in and out of his eager mouth. Then get ready for some intensity as Austin crams his enormous boner into Connor. Johnny’s at the other end, face fucking Connor who takes an extreme drilling from Austin.

But Johnny’s not finishing until he gets his hard cock inside Austin. He’s giving him a pounding you won’t soon forget, ending in a nice, warm triple cumbath for our boy Mr. Wilde.