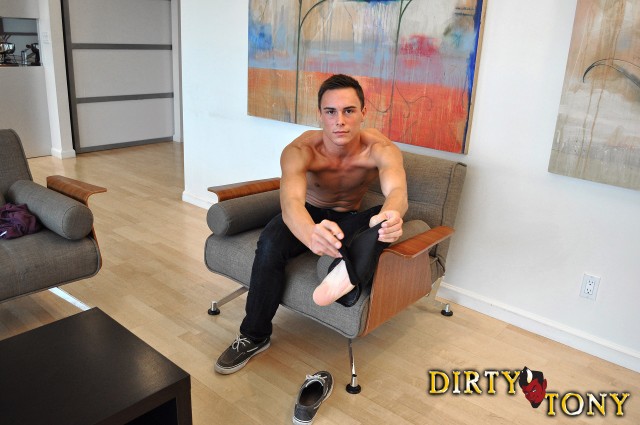 Travis Cole is a hot jock. You can tell that he spends lots of time in the gym as he has a pretty hot bod. This cutie sucks a load out of Tony while jerking an equally hot load out of his uncut cock.

Travis came into his interview horny from not having sex for seven months. I could tell he was hoping more than just a jack off session was about to transpire. So, I cut to the chase and asked him if he wanted to get “more involved”. He grinned and said he’d be down.  I was certainly down for more, since this young hottie was so cute and in such good shape. Although he’s not a total bodybuilder, I could tell this jock had been working hard at the gym. As soon as I came around the side of the camera, he grabbed for my zipper and unbuckled my belt. Grinning, he glances up at me before burying his face in my crotch. As soon as he can get my dick out, he glides his lips onto it and takes it all the way to the hilt. Then he wraps his hand around it and strokes while continuing to slobber all over my knob. Occasionally, he sticks his tongue out and flicks the underside while looking up into my eyes for approval. As he continues to demonstrate his oral skills, Travis unzips and begins to stroke his own uncut cock. He sits back on the sofa and jacks his dick while he works on my nut sack with his tongue, slurping and smiling along the way. He finally manages to coax forth the jizz that’s been welling in my balls and I spew a giant load onto his cheek and into his waiting mouth. As he sucks the remaining drops from my cock, he jerks faster until cum gushes out of his stiff dick and onto his smooth abs. He grins one more time and says what a great time he’s had. There’s nothing like an eager cocksucker to make a casting couch session go so much better.

Click here now to check out the full scene at Dirty Tony.