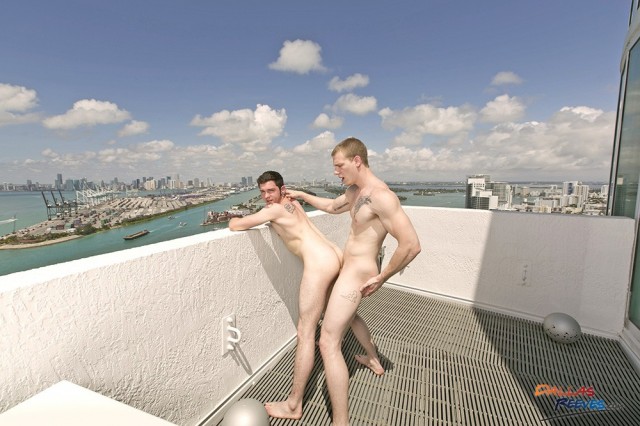 Wow! Johnny Forza is just so hot…and so is his new bottom buddy, Robbie Rivers! Robbie takes Johnny’s massive meat over and over again – and for all the world to see! The only thing more breathtaking than the cityscape is Johnny’s pecstacular chest! Will you bounce your pecs for us, Johnny? Please? Enjoy watching Johnny pound Robbie!

In this week’s Exclusive video for Dallas Reeves, we present Johnny Forza fucking the living daylights out of hot bottom Robbie Rivers. Both Johnny and Robbie are beautiful men with incredibly toned bodies, not to mention cute smiles. But what really makes this video popping is the combination of Johnny’s big rock hard dick and Robbie’s exquisite bubble butt framing a delicious pink love-hole. The action begins with Johnny taking off his shirt on the pool deck at the penthouse and teasing Robbie with his muscular pecs and washboard abs. At that moment Robbie also takes off his shirt, gets close to him, and they begin to make out. Their chemistry and attraction were irresistible, mostly because Johnny is always horny and Robbie knows it. Johnny knows, too, that Robbie has an irresistible pink hole. While they are kissing, they unbutton each other’s shorts and start to grab each other’s big cocks. Johnny wastes no time in pulling down his boxers to show off his massive 9 inch cock. Robbie does not hesitate to grab it and squeeze it hard. He begins stroking it back and forth until he begins to salivate imagining that beautiful cock down his throat. Not being able to resist, he gets on his knees and engulfs that monster cock in his wet mouth. Johnny starts to moan as Robbie works his oral magic, and the expressions on his face give a clue to how skilled Robbie is at working a dick with his mouth. Always one to return a favor, Johnny then gives Robbie’s cock some of its own attention. Johnny especially enjoys sucking dick after making out, so he gets a special thrill out of Robbie’s member. As Robbie gets blown, his anticipation grows, and soon enough Robbie is on his backside next to the pool, with his eager and inviting ass all ready for Johnny and his gargantuan 9 incher. Robbie takes that big raw cock with such pleasure. While Robbie is a favorite power bottom here at Dallas Reeves, for some reason he and Johnny just seem to click better than most. It is almost as if Robbie has been waiting months for this moment, and he relishes having Johnny inside of him, pounding his tight ass bareback, while he holds his legs in the air. Johnny decides to change scenery and they go together to the edge of the roof top. With his characteristic verve, Johnny slaps Robbie’s tight bubble butt and Robbie quickly responds by lifting his sexy leg so that Johnny has easy access to what he is craving more of. Johnny continues to fuck Robbie’s tight hole with his enormous raw cock. He thrusts in and out with an established tempo that Johnny really enjoys, but it is apparent that Robbie just can’t get enough – it’s as if balls deep isn’t deep enough for him. They make their way over to the rooftop lawn and Robbie lies down to expose his red and stretched out hole. Wasting no time, Johnny goes in for round three. Johnny inserts his humongous rod and hammers Robbie’s hole until he releases his cum all over Robbie’s sexy, wet ass. Robbie promptly gets off as well, and as Johnny’s warm cum still drips from his ass, he shoots his own load all over his sexy chest.

Click here now to check out the full scene at Dallas Reeves.